Actor-producer-director Manoj Kumar has been bestowed upon the most prestigious cine-award of India – The Dada Saheb Phaalke Award for the year 2015. While congratulating the veteran artiste for this extra-ordinary achievement of his, I am presenting the review of a classic movie made by him. It’s Upkar (1967).

In the mid-sixties, India faced double trouble. On one hand, Pakistan attacked our frontiers, on the other, there occurred a scarcity of foodgrains in the country. In such a scenario, then prime minister of India, late Laal Bahadur Shastri gave a slogan to the countrymen – Jai Jawaan ! Jai Kisaan ! (hail the soldier, hail the peasant). It was to underscore the importance of both the functions – safeguarding the frontiers as well as increasing the foodgrains production and inspiring the Indians to do something worthwhile for the motherland in any of these two ways. Since he himself was a man of principles and respected throughout the country by one and all, his call for having a fast on Monday (to reduce consumption of foodgrains) was wholeheartedly responded by the public. And in the war too, India emerged triumphant.

Actor Manoj Kumar got the idea of making a film through his slogan (and the situation prevailing in the country) and he debuted as a filmmaker (producer-director) in 1967 by making Upkar whose script is nothing but the expansion of this slogan only, containing all the Bollywoodish formulae to entertain the typical Indian movie buff.

Upkaar (obligation) is the story of a peasant-cum-soldier (Kisaan-cum-Jawaan), Bhaarat (Manoj Kumar) who despite being well-educated, prefers to go for peasantry in his parental village whereas his younger brother (step), Pooran (Prem Chopra) moves out for higher studies and gets spoilt. Bhaarat’s maternal uncle (Madan Puri) is a wicked man who had earlier killed their father and now he alongwith the money-lender of the village (Kanhaiyalal) fills poison in the mind of Pooran against his elder brother. Pooran gets separated from the family with his share of the land. Heartbroken Bhaarat gets consolation from his (step) mother, Radha (Kaamini Kaushal), his well-wisher, Malang Chacha (Pran) and a lady doctor, Kavita (Asha Parekh). He gets engaged to Kavita. However Pakistan’s attack on the nation provides him an opportunity to serve the motherland in a different form. He joins army and gets badly wounded in the war. To his greatest pain, his hands are removed in the surgical operation to save his life. However, Pooran realizing his fault, becomes the ointment for his heartache. He returns back to the family and becomes a peasant.

The title refers to the obligation of the motherland upon us and indicates that we should be ready to repay the obligation whenever the need arrives. The importance of the land (which was considered no less revered than the mother in the traditional Indian villages) as well as peasantry has been underscored pretty well in the movie albeit in a filmy way. And the hero’s character as Kisaan (peasant) is more powerful than his character as Jawaan (soldier) in the later part of the movie.

This maiden directorial venture of Manoj Kumar is the best product served by him to the Indian audience because in none of his later movies, he could touch the heights that he achieved in this movie. It is because the script of this movie is very good (courtesy the slogan of the then Indian premier). Since Manoj Kumar’s approach towards patriotism has always been superficial and loud (pseudo, to be exact), he could not make great patriotic movies and always presented formula-based flicks. Upkaar is no exception. Here also entertainment only is delivered in the colourful packing of patriotism but this fact is not felt by the viewer.

Manoj Kumar did not pay much attention to romance in his movies. Here also romance has got less footage. However Bhaarat’s saying ‘mention not’ to Dr. Kavita in response to her ‘thank you’ had got quite popular in our (English-learning) nation those days. Now nobody says – ‘mention not’ in reply to ‘thank you’. It has been substituted by ‘you’re welcome’.

The movie has been given a mesmerizing and colourful look though the village shown is not the real Indian village (of that time). It’s Manoj Kumar’s filmy village. But the thing is, it provides delight to the audience. In general also, the production value is quite high. Technical aspects are all in order. Considering the non-stop entertainment provided from start to finish, the length of the movie is also not felt. 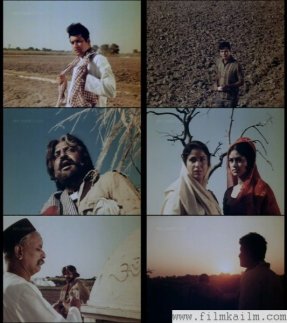 Manoj Kumar became Bhaarat forever for the movies of his banner with Upkaar. He has done well and in my view, this is the second best acting performance of his career (the best is in Shaheed). Asha Parekh, Kaamini Kaushal, Prem Chopra (who has always been an integral part of Manoj Kumar’s movies), Aruna Irani (a village girl, engaged to Pooran), Manmohan (Dr. Kavita’s brother), David (army major) etc. have done well. The baddies (and the comedians) are over the top.

But the character that became immortal with this movie is Malang Chacha who gave a pleasant turn to the career of the most hated villain of Bollywood, Pran. Pran has performed the role of the handicapped, carefree and outspoken Malang Chacha so well that you can never forget him after watching this movie. The song – Kasme Vaade Pyar Wafa has been picturized on him only.

Frankly speaking, Upkaar is sheer entertainment wrapped in patriotism. Still the movie is highly admirable and despite the change in times, relevant even today in several ways. The family bonds, the importance of the ancestral property, the love for the motherland, the sentiment of sacrifice etc. have not got outdated with time. It still appeals and should not be missed by the people interested in watching golden oldies. It has a great repeat value and the first time watcher will definitely like to watch it again.

A Chartered Accountant with literary passion and a fondness for fine arts
View all posts by Jitendra Mathur →
This entry was posted in Movie Review and tagged Movie Review - Upkar. Bookmark the permalink.