A treat for a typical Bollywood movie viewer

Kati Patang (1970) can, by all means, be considered a classic starring superstar Rajesh Khanna and the beauty of the sixties, Asha Parekh with highly melodious music of Pancham Da (R.D. Burman) and a very intersting story.

The story taken straightaway from a novel written by Gulshan Nanda under the same title, revolves around a lonely lady struck by ill-fate, feeling herself like Kati Patang, i.e., a kite cut from the thread whose strengh only enables it to fly joyously in the sky, now completely at the mercy of the winds. Madhu, being crazy in the fake love of Kailash, runs away from her marriage (like several Indian girls not able to differentiate between true and false love, committing similar error and consequentially ruining their lives). However the real face of Kailash is revealed before her as soon as she reaches him. Heartbroken and disenchanted Madhu comes back to her home only to find that just by one wrong step taken in her life, she has lost everything. The groom alongwith the Baraat (groom’s people accompanying him to the bride’s house for attending the wedding ceremony) has gone back and her maternal uncle who was her guardian and the only relative in the world, has died of shock. Confused as where to go and whom to look at for support, Madhu approaches her married friend, Poonam who tells her about her love-marriage initially not accepted by her in-laws but after her husband’s death, she has been called alongwith her little child to live in her Sasural (in-law’s house). Poonam offers Madhu to accompany her which Madhu with little options left, accepts. On their way, Poonam dies in train accident but not before handing over her little child and the letter of her father-in-law to Madhu with a request to imposter herself as Poonam there and take care of her child as if she were his mother.

Madhu, now impostered as Poonam, comes across Kamal and gets struck by guilt to know that Kamal only was her would-be groom and after her running away from home act, has almost drowned himself into alcholol, losing interest in life. Guilt-stricken Madhu alias Poonam consoles him and Kamal, forgetting the past, falls in love with Poonam, the widow of his childhood friend, Shekhar. But his lady-love is scared of accepting and reciprocating his feelings because of her fake identity. Things take a bizarre turn with the re-entry of Kailash in the scenario who tries to blackmail Madhu for monetary gain on the premise of revealing her true identity. The story reaches its interesting climax and happy ending after many twists in the tale. 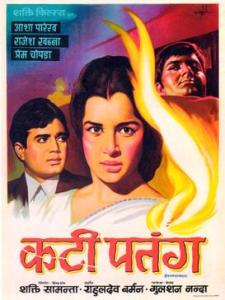 The direction of Shakti Samanta is highly admirable in this movie, keeping the viewer glued to the screen from start to finish. The combination of the highly romantic mood of Rajesh Khanna and the highly emotional acting of Asha Parekh alongwith the melody in Lata and Kishore voices is nothing short of a treat for a movie buff. All the songs are well-placed in the movie and the music lovers will endorse that both the lyrics as well as the composition is par excellence. Besides,the picturization of the songs also is so good that watching them gives the viewer a soul-cooling and heart-warming experience. The Holi song can, by all means, be considered as one of the best Holi songs ever seen in Hindi cinema.

The performances are praiseworthy. Stylish Rajesh Khanna, then in his heyday, is able to capture the hearts of the viewers with his mannerisms. Asha Parekh has never been considered a good actress but this is a movie in which she shows her capability in acting a different as well as difficult role. The support cast is well placed. Prem Chopra has been a stylish villain in his own capacity and Bindu a stylish vamp. So nothing wrong on their part. The art director, the costume designer, the cinematographer and the editor, all have done their jobs well. In those days, movies used to be longer than two and a half hours as the audience liked to watch a full length movie consuming that much time of the viewer.

A must watch for all Rajesh Khanna and Asha Parekh fans as well as for those Gulshan Nanda fans who are interested in going through their favorite author’s novel on celluloid.

A Chartered Accountant with literary passion and a fondness for fine arts
View all posts by Jitendra Mathur →
This entry was posted in Movie Review and tagged Movie Review - Kati Patang. Bookmark the permalink.

4 Responses to A treat for a typical Bollywood movie viewer